Densuș is a locality situated in Hunedoara county, with a population of 382 inhabitants. 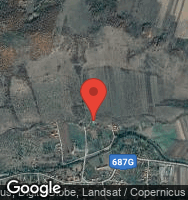 Located near the ruins of the former capital Ulpia Traiana, Densus Church retains the atmosphere of mystery that envelops in its history. Some believe it was the mausoleum of the Roman general Longinus Maximus, killed by the Gauls; Others believe it was the temple of the god Mars; some historians place the date of construction of the sixteenth century, others in the thirteenth century. Allegedly went through several changes. It was built from river rocks, bricks Roman tombstones, even sewerage pipes taken from Ulpia Traiana.

Is an odd shape, and inside are pieces of painting abode. The nave and the altar belonging to a painter Stephen. Last paintings were renovated with the support of US Ambassador Michael Guest. The church has a length of 30 m, width of 8 m, height of 18 m. The narthex is discovered and guarded by four pillars, dressed in tombstones. Altar table is a tombstone.

On the roof made of stone slabs are placed two lions. The tower above the nave. On one of the pillars inside is the Virgin Mary with Jesus in her arms, dressed in traditional costume. Many paintings were destroyed by reformers in the Middle Ages, and in the nineteenth century the locals wanted to tear down the church to build a greater. It was saved by Austro-Hungarian authorities who considered a monument and forbade the demolition

You can speak with us in: